We are proud to work with many media and broadcast partners in Kansas City and the surrounding 5-state area.

Bonner Springs, KS – Bonner Springs witnessed the melodious harmonies of Pentatonix on Sunday evening at the Azura Amphitheater. The a cappella group from Arlington, Texas is playing to huge crowds on their 2017 tour.

The evening started with Us The Duo opening the show with their two-man band. The husband and wife duo stunned the audience with their original song composed of their wedding vows right before the 2011 Sing-Off champions Pentatonix took the stage.

The crowd resounded as the main act came on right at 9 pm and began their set with favorite upbeat songs such as Na Na Na and Cheerleader.

Olusola performed an astounding rendition of Prelude from Cello Suite No. 1 with his beat boxing twist added.

The group picked up the beat again with a medley of Michael Jackson hits including, Billie Jean, Man in the Middle, Black or White and much more. Fans sang along with the group throughout the cheerful tribute.

Pentatonix sang two original songs during their performance, one being Misbehavin' during which they set out colorful bean bags and brought various fans on stage to sit with them while they sang. Scott Hoying pointed out his appreciation for a girl who had the Pentatonix logo tattooed on her shoulder while Mitch Grassi handed his microphone to his guest and let her sing part of the song.

Pentatonix brought Us The Duo back on stage to sing a Dolly Parton favorite, Jolene. The two groups voices blended flawlessly throughout this new take on an old classic.

Kirstin Maldonado did not feature in as many solos as anticipated; however, she was a charismatic front person and worked the crowd very well.

During an emotional performance of Imagine by John Lennon, the crowd was able to witness a well-timed shooting star in the sky. Talk about timing. Although the group on stage had no idea what was going on, it was one of those great outdoor concert moments for the fans.

Before the encore, bass Avi Kaplan thanked the audience and group for a wonderful six years as he will not be returning with Pentatonix after this tour due to the overwhelming schedule and missed time with family and friends.

This passionate thank you to his fans, led to a genuinely heartfelt performance of Sing where fans stood up and belted out the words for a touching swan song.

Ticket Information
For more information or tickets visit us at  https://www.azuraamp.com/ or contact Ticketmaster at Ticketmaster.com or by phone at 1-800-745-3000.

Summer heats up at Azura Amphitheater with a string of great summer concert events! 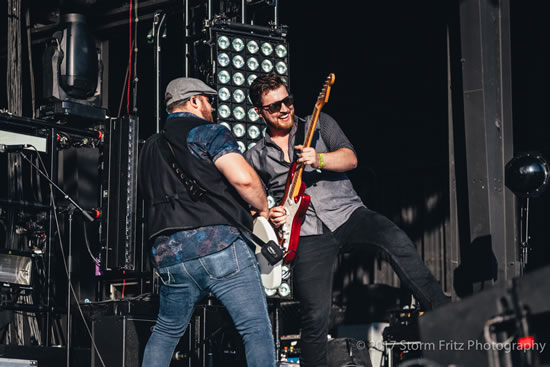 Bonner Springs, KS – The back half of the summer concert season at PMCA provides a little bit of everything for everyone who loves live music! From Hip Hop to Country Gold and the classic guitar of Ted Nugent, PMCA has your ticket to a great night of live music outdoors under the stars.

And you couldn't ask for a bigger grand finale with the red hot, Pentatonix closing out the season in late August. Hurry, tickets are almost gone for this one!

Ticket Information
For more information or tickets visit us at  https://www.azuraamp.com/ or contact Ticketmaster at Ticketmaster.com or by phone at 1-800-745-3000.